FULL DAY ESCORIAL, VALLEY OF THE FALLEN
& SEGOVIA
Saturday, November 9, 2019 - There is a holiday in Madrid on this date so many attractions/shops in Madrid may be closed.  This is a perfect time to book this tour!
9:00 AM - approx. 9.5 hours
$199.00 per person

Description:
Today, we will depart from our hotel and travel about 1 hour to Escorial.

On arrival we will visit the Royal Monastery of El Escorial.  El Escorial is a symbol of the Spanish power in the XVI century that commemorates the battle of St. Quentin. It is also a mausoleum for Charles V.   For years, the monastery has long been considered one of the eighth wonders of the old world due to the symmetry and balance of its construction in the humanist Renaissance style. Our visit will also include the Habsburg Palace, the Kings and Princes Mausoleum, the Chapter House and the Basilica.

Following our time in Escorial we will continue to the Basilica of Valley of the Fallen.  Located 9 km away from El Escorial, this enormous monument was built between 1940 and 1959 to honor the fallen during the Spanish Civil War. The basilica is carved into the mountain at 1350 meters of altitude, where an impressive 150 meters high cross places itself over the magnificent nature reserve of Madrid mountain range.

Around 12:30 we will depart to Segovia. (approx 1 hour drive) Once we arrive, we will have time for lunch (on our own).  Following lunch we will visit Segovia's famous well-preserved roman aqueduct, which is 16 km long. Home of some of the kings of Castile, this city preserves one of the most important medieval group of buildings in Spain.
Due to its elegance, the Cathedral of Segovia is considered to be “the Lady of the Cathedrals”.  Then we will visit the Alcázar. Rising out on a rocky crag above the confluence of two rivers near the Guadarrama mountains, it is one of the most distinctive castle-palaces in Spain by virtue of its shape – like the bow of a ship. The Alcázar was originally built as a fortress but has served as a royal palace, a state prison, a Royal Artillery College and a military academy since then. It is currently used as a museum and a military archives building. 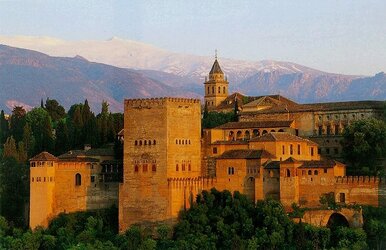 At the given time, we will be picked up and taken to the train station to board our train to Granada. The train ride is approximately 3 hours and 20 minutes.  Arrive in Granada.

Discover the legacy of Spain’s powerful Nasrid dynasty on this tour of Granada and the Alhambra citadel.  There are very few cities which have such a rich history that is so well reflected in the many monuments, in its appearance and in the atmosphere of its daily life. This tour includes a visit to the Alhambra,(UNESCO World Heritage Site)  a 13th – 15th century fortified palatine city, built by the Nazarite Kings; including the Alcazaba citadel, the Palace of the Lions, the Comares Palace  and the Generalife Gardens. Throughout the tour we will also see the Royal Room of Santo Domingo built in the orchards of Almaxarra;  the Palace of Alcazar Genil used by the Nasrid Queens; the Palace of Charles 5th, designed in 1526 by Pedro Machuca as a symbol of new power in the heart of the Alhambra, showcasing the most outstanding Renaissance work in Granada and possibly in Spain.

The panoramic tour will show the many traces of this city’s long Arabic past; from the Madraza (the old Arabic University) to the Alcaiceria (the narrow market) and close by, the Corral del carbón (the old Market).  Here we will have free time for lunch (not included)

Our tour continues with a visit to the Royal Chapel of Granada and the Cathedral.  The Royal Chapel was conceived as a burial place that would be intimately linked to the Cathedral, without merging with its architecture. It features a single nave, an octagonal presbytery preceded by steps, a modest transept with a choir at its west end, serving as a burial place. As a funerary chapel, no other in Spain rivals its size. It is at once simple and opulent, as a result of the queen's generous endowment. The Royal Chapel holds the remains of King Ferdinand of Aragon and Queen Isabella of Castile (who was initially laid to rest in the Convent of San Francisco in the Alhambra), along with the bodies of Queen Joanna I, Philip I and Prince Miguel da Paz.

Free time for shopping till 6:00 pm when we will be transferred to the train station to board train to Madrid.

The order of the monuments visit can change depending on time we get confirmed to visit Alhambra. 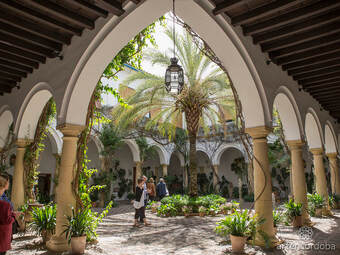 At the given time, we will be picked up and taken to the train station to board our train to Cordoba. The train ride is approximately 2 hours.  Arrive in Cordoba.

The Mosque-Cathedral of Córdoba is a UNESCO World Heritage site and one of Spain’s most visited monuments, but there’s so much to see inside, it’s hard to know where to start. This guided tour takes in all the highlights!  It is a fascinating building which offers surprising light and color effects as well as beautiful doors and nearly a thousand columns. The Cathedral of Gothic, Baroque and Plateresque elements was built inside in the 16th Century.

The panoramic tour continues showing the Roman Bridge displaying the restoration work performed by the Muslims and the “Juderia” (Jewish Quarter) with its Synagogue, situated near “La Aljama” district.  (Please note that the synagogue is closed on Mondays so we will not be entering it)  While here we will have the opportunity to sneak a peek at some of the famous "patios" and narrow streets that are distinctive of Cordoba as well as enjoy the views from the Roman Bridge which are some of the best in Cordoba of the mosque and cathedral.
​
Includes: Description:
This morning transfer from our hotel to Toledo; approximately 70 kilometers away. (about 1.5 hours).  The beautiful imperial city of Toledo is a UNESCO World Heritage Site. It is one of the oldest towns in Europe, called the “city of three cultures”; since Christians, Muslims and Jews all lived together. Its genuine Spanish buildings include almost all the periods of architecture (Arab, Gothic, Mudejar, Renaissance and Baroque style). The great painter El Greco lived here in the 16th century.

Upon arrival we start with a panoramic walking tour of Toledo, entering the old quarters to visit the Town Hall Square.  In the Town Square we will visit inside of the Cathedral of Toledo, admire the exterior of the Archbishop's Palace and the Toledo City Hall. Our tour continues as we walk through the old Jewish quarter with its narrow streets to visit the Church of St.Tomé with the very famous painting by El Greco "The Burial of Count Orgaz", and the old Synagogue of St. Maria la Blanca, which remain as a symbol of the coexistence of the Three Cultures.

After this we will have some free time for lunch.

Following lunch we will drive for approximately 1 hour to the emblematic windmills of La Mancha that became famous with the Don Quixote book. Tour the only windmill in operation, learn what made it so important and why Don Quixote remains popular more than 400 years after its publication.

Arrive back to Madrid around 5:15 pm.

MADRID:  PUBLIC TOURS
Tours and pricing are subject to change and availability.  These rates are constantly fluctuating within a few dollars.  Public tours do not usually have hotel pickup and drop-off.  You are responsible to make your own way to the tour starting point.  Public tours can be sold to all Madrid visitors and are not exclusive to Travel Haus.

ALL ORDERS ARE DUE NO LATER THAN FRIDAY, SEPTEMBER 13TH
Reminder:  Send No Payment Now.
Please wait until you are invoiced.  Thank you!