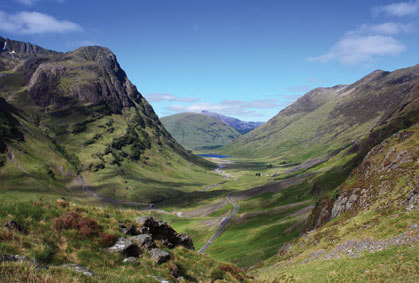 Description:
Departing from our hotel in Edinburgh our Loch Ness tour travels northwest, passing the imposing Stirling Castle, before making our first stop at Kilmahog. Here we stop for some light refreshments and the chance to see some Highland cattle up close.  We travel on through Rob Roy Country of Clans MacGregor and Campbell then over the dramatic landscape of Rannoch Moor and the Black Mount to Glencoe, one of Scotland’s most famous glens, site of the 1692 massacre of the Clan MacDonald.  Here we pause for a photo stop, and to soak up the atmosphere in this haunting glen.

Continuing via Loch Linnhe, our Loch Ness tour will stop in the Fort William area for lunch then continue into the natural beauty of the Great Glen as we pass beneath Britain’s highest mountain, Ben Nevis. Travelling on, we admire the Caledonian Canal and the pretty village of Fort Augustus, enjoying spectacular views of Loch Ness, as we drive along the shoreline to Urquhart Castle.

Loch Ness, 24 miles long and over 700 feet deep, is most famous for its sightings of the Loch Ness monster, affectionately known as “Nessie”. Spend approximately 2 hours at Loch Ness, where we will take a wonderful 5 star 'Loch Ness by Jacobite' cruise and explore the ruins of Urquhart Castle, and learn of its history inside the modern visitor centre.

Passing through Inverness, Capital of the Highlands, the Loch Ness tour will start its return for home, crossing the Grampian Mountainsand the woodland scenery of Perthshire, including the Forest of Atholl, with an evening refreshment stop at the Victorian resort town of Pitlochry, en route back to Edinburgh, where the Loch Ness tour ends at our hotel.
​
Price includes:Not Included:  Lunch
Please Note:  Travel Time to and From Loch Ness is approximately 4 hours each way. 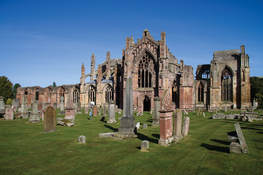 $156.00 per person
A minimum of 20 passengers is needed for this tour to operate

From our starting point at the Hilton Carlton, we head out of the city to view the Forth Bridge.  It is a cantilever railway bridge over across the Firth of Forth in the east of Scotland, 9 miles west of Edinburgh City Centre. It is considered an iconic structure and a symbol of Scotland (having been voted Scotland's greatest man-made wonder in 2016), and is a UNESCO World Heritage Site. It was designed by the English engineers Sir John Fowler and Sir Benjamin Baker. Construction of the bridge began in 1882. The bridge spans the Forth between the villages of South Queensferry and North Queensferry and has a total length of 8,094 feet. When it opened it had the longest single cantilever bridge span in the world, until 1919 when the Quebec Bridge in Canada was completed. It continues to be the world's second-longest single cantilever span, with a span of 1,709 feet (521 m).

Next we will continue to the village of Roslin, making our next stop at Rosslyn Chapel. Described as the "Library in Stone", the inside walls of Rosslyn Chapel are covered in thousands of ancient carvings, each with a story of its own. You can also learn of the myths and legends surrounding the chapel, including tales of the Knights Templar. Rosslyn Chapel's worldwide fame increased thanks to "The Da Vinci Code", Dan Brown's blockbusting novel.

Leaving Rosslyn we continue into the heart of the Scottish Borders, an area rich in hills, valleys, rivers and moorland, as well as being the traditional home to Scottish rugby. First up is a photo stop at Scotts View, a viewpoint in the Scottish Borders, overlooking the valley of the River Tweed, which is reputed to be one of the favourite views of Sir Walter Scott.

Next, we travel to the historic town of Melrose, birthplace of the game of Rugby Sevens and location of Melrose Abbey, founded in 660, said to be the burial place of the casket containing the heart of Robert the Bruce. Here we stop for lunch and have free time to explore Melrose and its Abbey.

After Melrose, we will make our way to Jedburgh.  The most complete of the four great medieval abbeys in the Scottish Borders, Jedburgh was founded in the mid-12th century by Augustinian canons; the town that grew up around it played an important role in the historic border struggles between England and Scotland. Repeatedly attacked by invading armies, the abbey was destroyed several times down the centuries before losing its status during the Protestant Reformation in 1560.

Today the abbey sits in the middle of the town of Jedburgh and is surrounded by herb gardens, a gently dilapidated graveyard, a picnic area and tranquil views over the Jed Water. The nave and bell tower of the abbey church are still standing, built in a mix of Romanesque and Gothic styles; visitors can climb the spiral staircase at the west end of the nave for impressive views over its arched avenue of arcades. It is then time for our return to Edinburgh with a dropoff at our hotel. 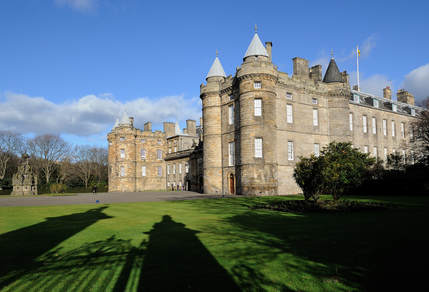 ​A minimum of 20 passengers is needed for this tour to operate.

Description:
We will being our day with the bus departure from our hotel to the Palace of Holyroodhouse for an exclusive tour which will allow us to explore the charm of the Palace of Holyroodhouse when it is closed to the public.   The palace will actually open to the public at 9:30 AM, 1 hour after our tour begins.  This behind-the-ropes 2 hour tour with an expert guide introduces the Palace’s important role today as Her Majesty The Queen’s official residence in Scotland.

Your guide reveals the Palace’s rich history, while explaining the fascinating behind-the-scenes work of the Royal Household that ensures the smooth running of Garden Parties, Investitures, audiences and receptions.

The West Drawing Room, used by members of the Royal Family as a private sitting room during Royal Week and not normally open to the public, is included in this tour.  It is among the most beautiful rooms in the Palace and boasts one of the finest 17th-century plasterwork ceilings.  Your tour continues through the magnificent Historic and State Apartments.

The tour will finish in the café with tea, coffee and pastries.  You will also receive a guidebook.  Transportation is NOT included back to the hotel.  You are on your own once the tour concludes unless you wish to continue with us on the optional tour add-on to the Whiskey Experience.  The Palace of Holyroodhouse sits at the bottom of the Royal Mile.

Optional Tour Add-On:   The Whiskey Experience Gold Tour
For those reserving this add-on, we will depart the Palace of Holyroodhouse by bus and be dropped off at the Whiskey Experience for our Gold Tour.  Become part of the whisky making process as you take a swirling, bubbling ride through their virtual distillery and learn the secrets of the Scotch whisky regions and the art of whisky blending with their guided sensory presentation.  Then with your chosen Scotch whisky in hand, enter their mesmerising whisky collection - the world's largest in private hands.
You'll become a member of their Scotch Whisky Appreciation Society and compare and contrast four regional single malts whilst relaxing in their beautiful McIntyre Gallery. Assisted by their experienced guides, and provided with tasting notes, you'll be able to sip like a true connoisseur, and compare the regions to find your perfect dram. You will receive a crystal whisky tasting glass as a souvenir.

EDINBURGH:  PUBLIC TOURS
Tours and pricing are subject to change and availability.  These rates are constantly fluctuating within a few dollars.  Public tours do not usually have hotel pickup and drop-off.  You are responsible to make your own way to the tour starting point.  Public tours can be sold to all Edinburgh visitors and are not exclusive to Travel Haus.

ALL ORDERS ARE DUE NO LATER THAN FRIDAY, SEPTEMBER 15TH